In conversation with Edmund de Waal, and sale of netsuke from the Ephrussi collection 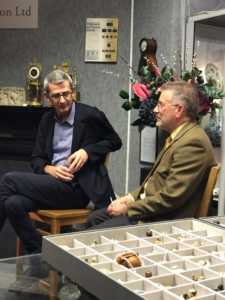 In the evening of 19th November 2018, ceramicist and writer Edmund de Waal and I spoke about netsuke, and his family collection in particular, before an invited audience of 30 guests at 25 Blythe Road, London base of auctioneer Matthew Barton.

Two days later 79 netsuke from the collection were dispersed in a sale of European and Asian Works of Art.  The collection has been made famous by Edmund in his family memoir ‘The Hare with Amber Eyes’.

Edmund de Waal and I had selected the netsuke for sale and I was responsible for descriptions, estimates and condition reports, as well as having the honour of being on the rostrum to sell them. On the day, all the lots were sold and made an average of 4 times low estimate.

The auction did not include Edmund de Waal’s titular hare, however, which along with the rest of the main collection, has been entrusted on long-term loan to the Jewish Museum, Vienna, joining the Ephrussi family archive donated to the museum in 2018.

In November 2019, there will be an exhibition at the museum about the family and its collections which will subsequently tour internationally. An admirable condition of the loan is that the public be able to handle the small sculptures.

De Waal says that the decision for the netsuke to leave home “wasn’t easy, but it feels complete that they keep moving. Things are still tricky today, there’s a story still to be told and work still to be done”.

The consignors have pledged the proceeds to the Refugee Council.

The netsuke collection of Charles Ephrussi (1849-1905) was acquired in Paris in the 1870s, and was subsequently sent as a gift to his cousin Ritter Viktor von Ephrussi (1860-1945) on the occasion of his marriage to Baroness Emilie (Emmy) Schey von Koromla (1879-1938). Through the ingenious initiative of a family maid, Anna, the netsuke survived the Nazi looting of the Palais Ephrussi in Vienna, and were retrieved after the war by the Ephrussis’ daughter Elizabeth de Waal (1899-1991) and taken to Japan by her brother Ignaz (Iggie) Ephrussi (1906-1994). The entire collection was bequeathed by him to his great nephew Edmund de Waal (born 1964).

facebooktwitterlinkedinredditwhatsapppinterestEmail
Tap To Call Us Now
We use cookies to optimise site functionality and give you the best possible experience according to our privacy policy. Accept